5 Verbal Reasoning Strategies You Must Know

Do you struggle with UCAT comprehension style questions? Never fear! In this article, we describe 5 Verbal Reasoning strategies you must know and show you how to approach some sample questions!

Verbal Reasoning is the first subtest in the UCAT and tests your ability to understand and process written information. It might seem simple enough – read a passage and answer four questions – but the passages are long and contain complex details, the questions are purposely confusing, and you need to do that 11 times over in a short time. To help you overcome this, we’re going to share 5 Verbal Reasoning strategies you must know to ace your UCAT.

In this article we’ll look at an example of a passage and questions, covering the two formats found in Verbal reasoning – multiple choice (MC) or True False Can’t Tell (TFC).

5 Verbal Reasoning Strategies You Must Know

Here are some things to keep in mind before we get to the passage and questions.

The passages in Verbal Reasoning are approximately 200-400 words long. Reading the passage carefully, understanding it and answering the questions will ensure you run out of time. So, don’t do that!

Instead,  skim the passage to get an idea of what it’s about, what information is there and where it’s located.

Is the passage about a topic you’ve never heard of before? Great! Verbal Reasoning questions must be answered based on the information given in the passage only.

You must not base your answers on any other knowledge you may have on the topic.

The passages will contain a lot of information, but for some questions you may only need one sentence or one paragraph to find the answer. Read the question first and see if this is so, then skim the passage again to look for the relevant sentence or paragraph.

4 – Be strategic with time

Other questions may need you to read several paragraphs or the entire passage in detail and then draw a conclusion. These will be more time consuming. Consider whether you have time, or whether you should make an educated guess, flag the question and return to it at the end of the question set when you’re more familiar with the passage, or the end of the subtest altogether.

If you want to learn more about the Verbal Reasoning subtest, you should read our Guide, here.

Need a free UCAT cheatsheet to help you prepare?

The ultimate UCAT reference to help you ace your UCAT! 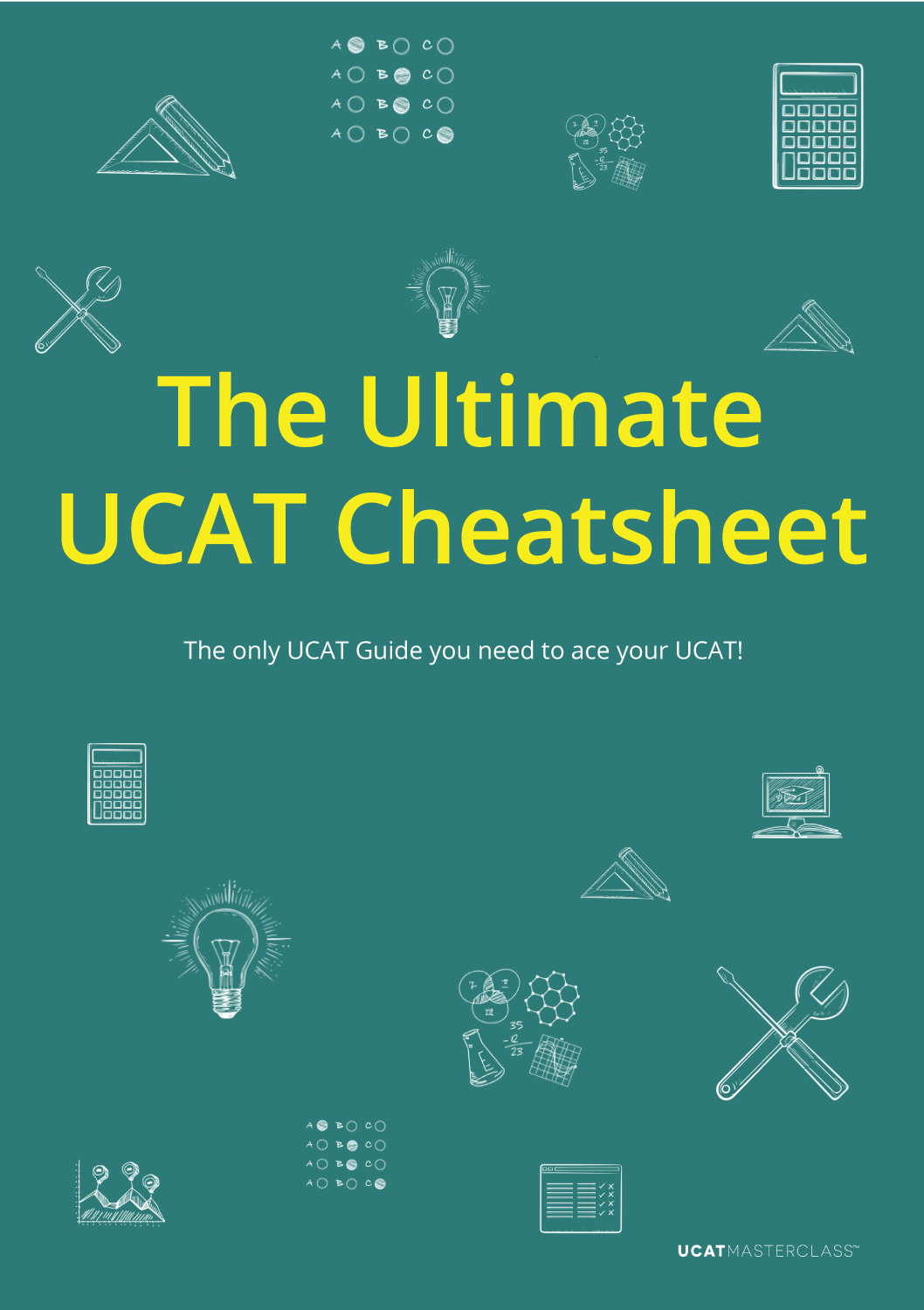 Let’s put these 5 Verbal Reasoning strategies to the test

With that in mind, have a look at the passage below. Skim the article to get a feel of the topic of each paragraph and move on to the questions.

The feminine magnes was used in glass making and needed to be differentiated from another mineral from Magnesia also used in glass making. This third mineral was white, so colour was used to differentiate the two – magnesia alba and magnesia negra for the white and black forms respectively. Eventually magnesia negra came to be called manganesa, and it was magnesia alba that came to be known as simply magnesia. The elements discovered in these minerals came to bear their names – manganese and magnesium – with the minerals being oxides of these elements, whereas magnetite was found to be an iron oxide.

Whilst these minerals and elements are named after Magnesia, Magnesia itself is named after Magnes, the first king of the region in Greek mythology. The story begins with the sacrifice of a boy to Zeus, who finds the sacrifice so repugnant that he floods the world to punish people for their hubris. Deucalion, who plays the role of Noah, had been warned by his father Prometheus and built a chest in which he and his wife Pyrrha survived the flood. As the waters receded, the chest landed on a mountain somewhere in the then-Greek world: Parnassus, Etna, Athos or Othrys.

To repopulate the world, Deucalion and Pyrrha were told to throw the bones of their mother behind their shoulder. They interpreted this to mean the bones of Gaia (mother Earth), and her bones to be stones. Those thrown by Deucalion became men and those thrown by Pyrrha became women. Their own descendants, produced by conventional means, were the heads of the Greek tribes, with Magnes being the head of the Magnetes that lived in Magnesia.

The passage is fairly typical – around 330 words long, in multiple paragraphs that cover a variety of topics.

It contains many details of places, minerals, elements and people all somehow related which may be too much to absorb in one reading.

Many of the names contain the root “magne-” so care must be taken not to get them confused.

In the UCAT, each passage will be followed by four questions. These will either all be in the MC format, or all in the TFC format.

Let’s look at some examples, starting with a set of multiple choice questions, so you can see how and why to apply these Verbal Reasoning strategies:

This is a keyword question, and you must select the answer option that best completes the sentence. The verbal reasoning strategies you should follow for this sort of question, are:

The correct answer is (d) as the passage states both minerals are found in the same region. Note that “region” and “area” do not have very specific meanings in this context, so are used interchangeably.

Let’s also look at the other options: (a) is incorrect as the passage says there are two black minerals originally called “magnes”.

Don’t get confused by the second paragraph that talks about a black and a white mineral – these were both called magnesia.

Options (b) and (c) are incorrect as the passage says they were differentiated, based on whether they attracted iron. Only the masculine one did, meaning the feminine was not magnetic.

This question is a direct comprehension question. Although there are keywords (manganese and glass) that take you to the second paragraph, the answers are not explicitly given.

This requires more careful reading and comprehension than a keyword question.

You can start by reading an answer option and checking against the paragraph. Each time you’ll become more familiar with the paragraph.

The correct answer is (b) as magnesia negra was used by glassmakers, which was then called manganesa, which is a manganese oxide. Therefore, the glassmakers used manganese as an oxide.

Therefore, comprehension of the paragraph is required to answer the question. Make sure that you apply the Verbal Reasoning strategies of reading the question first and reading it thoroughly to ensure you answer correctly.

According to the passage, which of the following is most likely to be true?

This is an example of an evaluation question. The answer options are not directly discussed in the passage. They could all be true and may indeed be factually true.

However, you cannot rely on your pre-existing knowledge and must evaluate which is most likely to be true only according to the passage.

This means you need to assess each option against the information in the passage before making a conclusion.

Putting this together gives (b) as the correct answer.

Option (d) is factually true, so if you happened to know that you may erroneously select it as the answer. However, it is not the answer as it is not supported by the passage. You can also see that this question requires more work as it is an evaluation question and the information is scattered over two paragraphs (or over the entire passage had the question been more difficult), so you’ll need to be conscious of time.

At the time of the flood, Deucalion

Finally, an inference question. This requires you to infer something from the information in the passage beyond what is explicitly stated. The question refers to the “time of the flood” which takes you to the third paragraph.

You can approach this question in a similar way to the direct comprehension question.

The correct answer is (c). Since he and his wife survived in the chest, we can infer it was large enough for two people.

Option (a) cannot be inferred. The passage implies he had children with Pyrrha after the flood but does not preclude him having any prior to it (e.g. with other women).

Options (b) and (d) are incorrect as Deucalion used a chest he built himself, not Noah’s Ark or one provided by his father. You might select these if you,

Clearly, the Verbal Reasoning strategies of being wary of pre-existing knowledge and reading all answers are key, here.

Now for some TFC questions:

a statement is given and you must decide if the statement is true or false according to the passage, or if you can’t tell due to insufficient information.

Text from the previous questions that was already discussed has been re-framed, to make the difference between the formats easier to see.

The two minerals called magnes come from the same region.

This is True as already discussed and is essentially the same keyword question in a different form.

Manganese was added to glass as magnesia alba.

This is False, as already discussed, it was magnesia negra. This is still the same direct comprehension question.

The answer is Can’t Tell, as the exact relationship is not given in the passage. This question now becomes an easier insufficient information question rather than an evaluation question.

At the time of the flood Deucalion had no children.

The answer is Can’t Tell as noted above, and this again becomes an insufficient information question.

TFC questions can be easier than MC questions, as they require the evaluation of only one statement rather than four.

Register for the free, UCAT Mock Exam Day and see how you rank against your peers.

How to Speed Read for Verbal Reasoning Success